The Belleville Kiwanis Club pulled off a surprise birthday bash for their oldest and longest active member: Dan Wolford. His sons, Dave and Drew, were key in making this gathering a success. They were able to bring him to the party without him being none the wiser that a crowd of old friends were waiting for him as guest of honor. Brian and his Denny’s crew accommodated the birthday boy and his friends during a busy breakfast hour. These good friends, who work closely together in the service of children locally and throughout the world shared many a laugh that day. 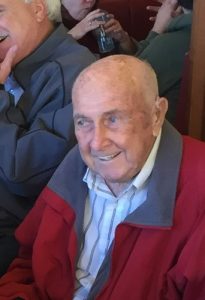 Dan Wolford has directly and indirectly touched the lives of hundreds of thousand of children in the Belleville area. He inspired others to make the world a better place on a few fronts. He worked as an agriculture teacher and a vice-principal at Belleville West High School.
His work there was not enough for him. He joined the Kiwanis 57 years ago in 1962 in order to expand his service to children. He took on many leadership roles, which included President and Vice-President of the Belleville Kiwanis Club. He received many awards to include the prestigious Amador Award, which is given to those who have demonstrated over an extended period of time, extraordinary personal dedication of one’s time and resources to the pursuit of charitable, benevolent and community service activities consistent with the Objectives of Kiwanis. This describes Dan perfectly.

Patti Thomas, President of the Kiwanis Club of Belleville says, “Dan Wolford is such a kind-hearted and generous man who has devoted much of his professional & personal life to helping kids. Our club is pleased to name our scholarship for a graduating Belleville West Key Club member in Dan’s honor.” This scholarship award of at least $500 goes to the most deserving graduating Key Clubber. 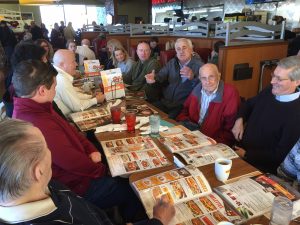 Dan also brings the Kiwanis and Key Club members to his farm for a year end celebration of food, fellowship, and fishing. It is a tradition that lives on as a joyful reward for service to the children of the world.

Thank you Dan for all you do. Happy Birthday!