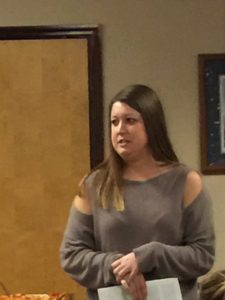 Marissa Thomas, former Lt. Governor for Key Club District 31/34, spoke to local Kiwanis clubs during a recent gathering. Peppering her speech with humor, she focused on how the Key Club and the Kiwanis played an instrumental role in her academic and career successes. She was goal oriented and driven to succeed from her early days when a friend convinced her to attend her first meeting, assuming secretarial and leadership duties within the club, and then taking on the role of Lt. Governor for District 31/34.
Marissa described how, as Lt. Governor, she made friends across the State and worked hard to make Belleville West Key Club much more competitive against powerhouse clubs such as Murphysboro. She set the bar of success for those who succeeded her. “I was welcomed to my position as the Lt. Governor by Gary and Patty Heath, who are members of two local Kiwanis Clubs. It’s funny to now think I knew them way before my parents did,” says Marissa.

During her college years, Marissa’s involvement with her

sorority and Circle K proved to strengthen her organizational and leadership skills. Involvement with the organizations on campus showed her the importance of creating personal networks.
“I think of Key Club as the foundation for many of my skills, as leadership, networking, and responsibility which led me to where I am today,” Marissa said.

Other former and current Key Club members joined Marissa during the event including past current and future District 31/34 Lieutenant Governors.

— Marissa Thomas works for the CDC in Washington, DC focusing on Congressional Legislation. —